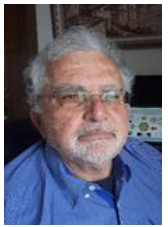 Abstract: It is illustrated that in atomically precise armchair graphene nanoribbons (AGNRs) of finite length L, synthesized using molecular precursors, n pairs (occupied/unoccupied) of topological end-states can develop, comprising their frontier molecular orbitals (MOs), which are localized at their zigzag ends. These states appear at critical length(s) Lc at which a metal-insulator-like transition takes place, associated with a peak in the density of states (DOS) at the fermi level Ef, and a rather abrupt change in conductivity and energy gap. As a result, we can have various types of “bulk” and “surface” gaps. The number n of the pairs of topological states depends on the width W of the AGNRs, measured by the number of end zigzag rings Z (W=2Z=1) where Z, depending on the AGNRs’ type, is given by Z= 3n, 3n±1 n=1, 2, 3, … Thus, wider AGNRs (n>1) are expected to have a larger number of end-states. However, the corresponding “transitions” are not expected to be so abrupt as for the thinnest n=1, W=5 AGNRs, due to quantum confinement. Yet, surprisingly enough, we have recently found that in wider n=2 AGNRs (W=13, 15) at large enough lengths, abrupt (and intense) jumps in conductivity and band gaps can be developed, due to (mainly) MO interactions of the multiple end-states localized in the same region around the zigzag ends. As a result, (constructive) quantum interference effects can result (CQI) with profound possibilities for applications related with transport (conductivity) and electronic properties (bandgap) functionalization in nanoelectronics and nanoscience.


Biography: Aristides Zdetsis is professor emeritus at the Department of Physics University of Patras Greece, where he also serves as head of the local molecular engineering laboratory. Prof Zdetsis is a fellow of IAAM and a Vebleo fellow. He is currently involved with theoretical and Computational work in graphene and graphene-based 2D materials and structures. He has written more than 155 scientific articles, from which almost half are monographies. He has written 4 books (in Greek for the Greek open university and university of Patras) and 1 under preparation (in English on graphene). He has performed more than 160 verified reviews (publons) and has given more than 50 invited (and keynote) presentations in international and topical conferences.